Young leader fights to save his friend from deportation

14-year-old high school student Damian Hill first met Emeline Yuwono in the back lane of his Randwick home 2 years ago. He quickly learned that 11-year-old Emeline had autism and her mother Mei Tieng Lim had brought her to Australia from Indonesia for care and treatment that is not available in their home of North Sumatra. Despite tourist visas and many unsuccessful attempts to stay in Australia, Emeline and her mother now face deportation.

It saddened Damian to hear about Emeline’s life before coming to Australia. Mei told him that she used to have to put Emeline in an orphanage while she went to work and that she would often find her daughter badly treated and covered in scabies and lice when she returned to pick her up. Emeline’s relatives often believed she was possessed by a spirit due to their lack of education surrounding her condition.

Damian says Emeline has improved so much since being in Australia. She is now toilet trained and better able to communicate. She laughs often and has formed a strong bond with Damian’s dog Charlie – something he believes has had a significant impact on her learning and progress.

It does not come as a surprise that Damian was deeply angered by the uncertainty surrounding Emeline’s future. There was no question about it; he had to do something to help. It was as simple as that. But what could he do to help his friend and her mother stay in Australia?

“Dad and I discussed it over dinner one night and he helped me put together a plan of action. It wasn’t going to be easy - not only did we need to learn more about the rules relating to Mei and Emelines’ case, we also needed the support of prominent locals if we wanted the campaign to have any chance of influencing the Minister for Immigration.”

Damian urged people to sign an online petition that had been set up in support of Emeline and her mother. He began approaching members of the local churches, politicians and people throughout the local community to try and garner support. He used Facebook as a way to spread news of his work with family and friends and more recently has been able to boost some serious online support for the case thanks to the publicity generate by an SBS news piece. The petition now has over 20,0000 signatures to date. It is his hope that the Immigration Minister, Peter Dutton will grant a ministerial intervention.

“My dad has always encouraged me to help those in need of assistance, says Damian. “I have never been scared because I know this is such a worthy cause. I just want Emeline and Mei to enjoy a life that doesn’t involve anywhere near as much hardship as they had previously endured.”

Damian’s actions have raised some big questions about the treatment of people with disabilities who are seeking government protection and generated some serious conversations surrounding the issue within the public at a national level. However, what is truly remarkable in this instance is the genuine compassion and empathy Damian has shown for his friend. He saw something he believed to be unfair or unjust and decided to act. This desire to act just doesn’t come from nothing, it comes from a deep sense of empathy and genuine compassion – traits that many would say are the most important attributes of all great leaders, and certainly ones that must be nurtured from a young age! There is no doubt in our minds that this has happened in Damian’s case.

Despite the large public response to Damian’s plea, The Minister has not yet responded to the second application for Mei and Emeline to stay in Australia. Damian still remains optimistic.

“If you are truly genuine about helping someone or fighting for an issue you believe and are willing to put in the necessary effort, then nothing is unachievable.”

STORY UPDATE: Representations from members of the local community have been successful and we have been advised the mother and daughter have been granted a medical treatment visa and will be able to stay for at least 8 years. 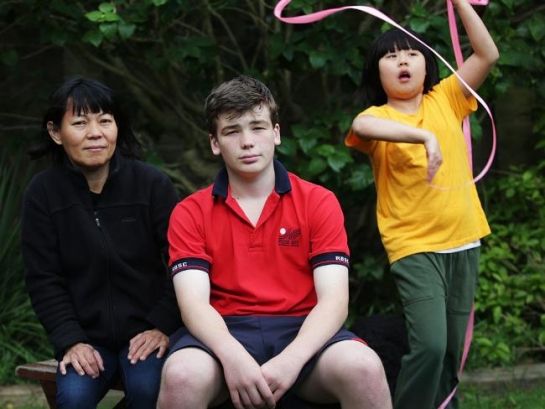