The ImagiNATION: taking young people to a place where anything is possible 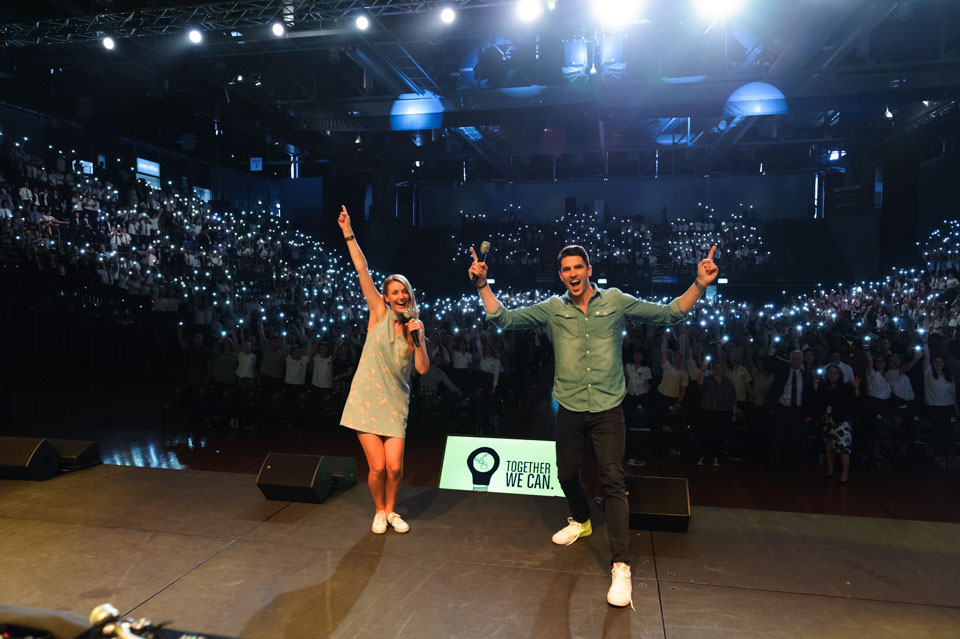 We recently commenced our national tour of The IMAGINATION, a new version of The National Young Leaders Day, Australia’s premier youth leadership event. We had big plans to inject a new energy into the long-standing format. The aim: bring to life a dynamic program that encourages young people to harness the power of their networks and work together with their peers to create real change in their schools and communities.

As we look back on the events just gone, it is nothing but smiles from the entire team and extended community of volunteers who make this initiative possible. We have introduced some exciting new additions to the program that give students the opportunity to voice their visions for a better future and have taken some seriously bold steps in introducing new production elements & content that we believe help make the day all that more engaging and memorable. Whoever thought you would see students and teachers celebrating the end of a great day of leadership learning dancing to an epic DJ set? Yes - this really happened. Head over to our Facebook page to check it out.

We are most proud to have given young people the chance to connect with some inspiring role models and learn the real-life stories, challenges and experiences of leaders from a variety of fields. It is one thing to preach what the true meaning of leadership is but it is another to give young people the opportunity to decipher it for themselves.

On that note, here are some of the key leadership insights shared by speakers at The IMAGINATION last month:

To make a real impact on the community, we must do things differently – Nic Marchesi & Lucas Patchett, Co-founders of Orange Sky Laundry and Young Australians of the Year 2016

It is ok to say no. Know that you are not disappointing people if it’s simply not for you. It's important to focus on the things you can do rather than what you can’t do – Melissa Doyle, Journalist and Channel Seven News Presenter

Show people how much you love something. Be passionate and positive. Encourage others to take a chance and go for it – Poppy Starr, 16-year-old international Pro-Skater and Entrepreneur

You can achieve anything you want - as long as you have the work ethic to match it – Alyssa Azar, youngest Australian to summit Mt Everest

You will always face setbacks to achieving your goals but it is up to you to keep standing back up – Danielle Prince, Australia’s Top Rhythmic Gymnast

You are powerful because you have influence and can be a positive role model to others – Robbie Miller, Musician & Winner of Triple J Unearthed's National Indigenous Music Awards (NIMAs) 2013

Have your own idea of success. Don't ever allow someone else's achievements to be the measure of yours – Kate Austin, Social Entrepreneur & Founder of Pinchapoo: a cheeky start up turned national NFP founded on the idea of ‘pinching’ surplus hotel shampoo’s and giving them to disadvantaged communities

Leadership is about knowing yourself, setting a great standard, having a vision and empowering those around you to get the best out of themselves – Bianca Chatfield, Former Vice-Captain of the Australian Diamonds and Melbourne Radio Show Host

You can only control two things in life, how you prepare for what might happen and how you react to what does happen – Gemma Knight, IMAGINATION Host, Actress and Television Producer

Leverage your networks. Put yourself out there. You never know where it might take you – Scott Tweedie, IMAGINATION Host, Television Presenter on The Loop - Channel Eleven

Leadership is putting yourself before others. It’s taking responsibility and being accountable – Abdul Abdullah, Artist and Archibald Prize Finalist

Stay true to your core values. Identify your strengths and lead with them – Samantha Skinner, Certified Leadership Practitioner and General Manager of Halogen Australia

Thanks for being an integral part of The IMAGINATION: a nationwide community of people who aspire to lead themselves and others well. We look forward to continuing our work with leaders, organisations, educators and young people to ensure the next generation shine bright on behalf of those they lead, both now and in the future. If you would like to share an idea for a speaker or new program element, drop us a comment below.

The IMAGINATION will continue its tour around the country for both primary and secondary aged students during March 2017. For more information and to book tickets, go to www.halogen.org.au/events