Young people are often talked about and pin-pointed for negative reasons. But today, it prides us to say that Australia’s Team Leadership Award for Students (ATLAS) has uncovered stories of great leadership and inspiring initiatives within secondary schools across Australia! And the type of leadership we are talking about is not the kind that stems from individual effort alone, but the type that occurs in instances where young people work together as a team. At Halogen we believe that this is where the magic happens. With many heads, hearts and hands working as one, incredible things can and will follow. And this was certainly the case for students from Maryborough Education Centre, winners of ATLAS 2015!

Year 9 student, Peppa Rasmussen-Breitinger, at Maryborough Education Centre (MEC) suffers from a rare disease called Scleroderma. In June this year, Peppa and her friends engaged a group of fellow year 9 students along with year 12 students, MEC ex-students and local community members to execute a project that aimed to educate and raise money for much needed research into this rare disease. And so, Polkadots for Peppa was born…

Together, students in the Polkadots for Peppa crew planned and organised in-school events that saw guest speakers from the Scleroderma Foundation share stories with students about how the disease has personally affected their lives. Other speakers invited to visit the school included Robyn Sims, executive president of Scleroderma Australia and Jennene Caton, Committee Member from Scleroderma Victoria. A vast array of fundraising efforts followed. Students made and sold polkadot themed cupcakes, collected donations for a raffle, sold hand-made polkadot ribbon pins and even ran an out-of-uniform day with a polkadot theme to help engage their peers. Posters and donation tins were placed both at school and in the local community to help raise awareness and funds.

The overall impact of Polkadots for Peppa has been far reaching with students raising an incredible $10,000! After the events at school, Peppa and her family attended a World Scleroderma Day Dinner at the Grand Hotel in Richmond and presented the giant cheque to the president of the club.

“I was so amazed to find out that something we thought was so small could turn out so big.” -- Peppa

Polkadots for Peppa was a positive experience for the whole school and local community at large. Most importantly, many more people have become aware of Scleroderma. The whole project was completely student-led and those involved have learnt some invaluable leadership skills along the way, including how to work effectively as a team, run a major event, exercise empathy, be creative, think big and make their ideas happen. They have gained an incredible amount of confidence and learnt to feel comfortable speaking in front of large crowds. The students have also formed some long lasting friendships and will be running another community event in 2016! (Watch this space).

CPA Australia chief executive and competition judge, Alex Malley, said: “This winning project was both courageous and innovative. I know when I was in Year 9, I would not have been capable of generating such an idea or executing it at the level these students have. I was very impressed by their proactive spirit.”

“It’s extremely encouraging to see that students from the school identified the need for awareness of a rare disease,” said Victoria Cross Recipient, Ben-Roberts-Smith.

“I also loved this way this campaign reached out to experts, and the wider community. It was lovely to see everyone come together to support the project,” added Jessica Watson.

“It really was a well-executed program that delivered some fantastic results,” said Justin Graham.

“Taking the time to walk in another’s shoes is an essential life skill. These students are to be congratulated, I sincerely hope this sets a pattern for their future,” added Dr Fiona Wood.

As part of their recognition, students from the Polkadots for Peppa crew will receive an exclusive leadership masterclass with Alex Malley, who, on top of his chief executive duties, provides career guidance to young people via his online community, thenakedceo.com.

Major sponsors of ATLAS, CPA Australia, will be at The National Young Leaders Day in Melbourne on the 20th of November to present students from Maryborough Education Centre with certificates of recognition in front of an audience of 1,000 young leaders from schools across Victoria.

“We are overjoyed at the acknowledgment that the ATLAS Award has given to the Polka Dots for Peppa crew and to our entire school community,” says Principal of Maryborough Education Centre, David Sutton. “This prestigious award gives many others a glimpse into something we see every school day- namely young people working together to support one another. We could not be more proud of this.”

Halogen would like to congratulate all the schools that entered this year’s award and to those who had teams shortlisted. ATLAS will be back in 2016. For more information, head to the ATLAS page on our website and stay tuned for updates. 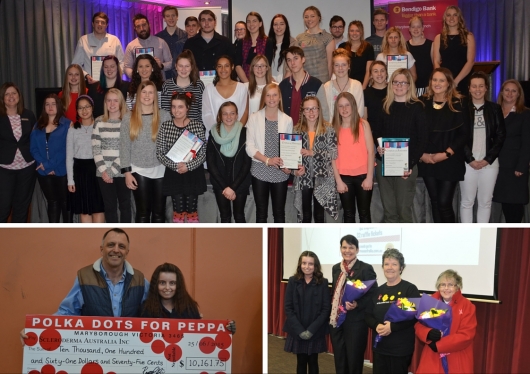