Jules Allen: Ever been told you can't do it, you're never going to make it?

Have you ever been told that you will never be what you want to be? That you’re not the right fit, not talented enough, not the right shape, size etc? Nearly everyone I come across has had, usually in their earlier life, an experience similar to this. I am fascinated by what differentiates those who listen and let opinions dictate their future and those who pursue their dreams regardless.

Misty Copeland is the first African American ballerina to be the principal dancer at the American Ballet Theatre in its 75 year history. Copeland was told by the Ballet Academy at 16 that she would never be a dancer as she had “the wrong body”! Devastated by this shattering of her dream, she quit ballet. Some months later she made the decision to ignore the rejection and chase her dream. Her career in dance and the accolades that followed scroll on for pages. She has been named one of the 100 most influential people in the world.

I was recently made aware of a similar story here in Australia with a young girl by the name of Mimi Leshari. This strikingly beautiful young girl decided, at the age of 16, that she wanted to enter the modelling industry. She approached various agencies only to be told that, yes, she was stunning, but she was way too short and “would never be a model”. At 19, Mimi is now one of Australia’s most successful up and coming models with several media outlets heralding her as the new Elle McPherson.

When discussing the remarkable prevalence of this issue with my Manager, John Scott, he went on to share his story with me. As a child and young teen John was obsessed with movies, film and all that came with it. He was asked by a teacher one day what he wanted to be when he was older to which he responded “I want to work in the film industry”. The teacher promptly responded by stating “That will never happen”. John has successfully carved out a career in the film and entertainment industry holding senior positions with a myriad of companies such as 20th Century Fox for the past 20 years.

There appear to be four main questions here...

What is it that causes some to strive on regardless and countless others to give up on, what I believe to be, their true purpose?

Why is it we take the naive and often, ill informed word of another and give it so much weight in light of our own knowledge of ourselves and our true desires?

What is it that makes those select few the ‘standouts’ after they have made the decision to go up against the odds and fight to achieve their dream?

What gives someone the right to have any say over what someone can and can’t do with their lives?

Firstly, it seems that the desire to fight on regardless depends largely on the amount of respect you have for the person who delivers the limiting comment. In John’s case, for example, he had no respect for the teacher in question, therefore the comment held little weight. This, in part, also answers question number two. Regardless of our independent thinking, we subconsciously accept the opinions of those who we respect  as we assume they have our best interests in mind or know better than we do when it comes to our lives.

The answer to question three has created the most intrigue for me. When I set about researching Misty, not only did I find a dancer who smashed my previous distaste for ballet but there was something else. She stands out! Instead of changing herself to meet the requirements of the institution, she became so good that the institution in question had to adjust their rigid expectations in order to attain her. She is totally uncompromising in her poise, stature and motivation. When I had a closer look at Mimi and John, they too possess this quality. Mimi could not change her height, but ploughed on, making no apology and carving her place in an intensely unforgiving world. John is equally non-conventional in his role, constantly challenging the status quo in an incredibly conservative domain.

Finally and of significant importance is the answer to question four. If we are to be honest with ourselves we have all, at some point, had an opinion about what someone is capable of.. It’s what we do with those opinions that is crucial. As mentioned earlier, only the person with the dream can feel the strength of how that burns within them.

So, in a nutshell, don’t say it, don’t listen to it and get out there and go for gold!
As Misty aptly states, “I will what I want!”

Jules Allen is an award-winning Australian youth advocate with professional experience in child protection, youth support and school counselling. She is also a proud single mum and has cared for 31 foster kids to date. She has recently written her first book, YOUTHinc, which takes a practical approach to dealing with the big issues faced by today's youth. Thanks to ICMI, Australia’s Premier Speakers Bureau, Jules spoke at The National Young Leaders Day for secondary students in Melbourne. For more information go to julesallen.org. 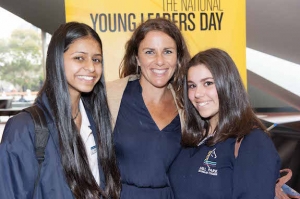