“What was your proudest moment?”or “What does it feel like to achieve the goals you have set for your life?” are questions that often float around at our events.

In my early days at Halogen, what I often observed, was that when we invited accomplished people to share their story with young leaders, they never dwelt on responses to these types of questions.

In their most honest moments, what the best kinds of leaders wanted most to pass on was their struggle, inadequacy, and even… their failures.

Imagine my surprise when former Perth Wildcats captain Brad Robbins, a consummate sportsman, chose to talk about one of his most unsportsmanlike moments. 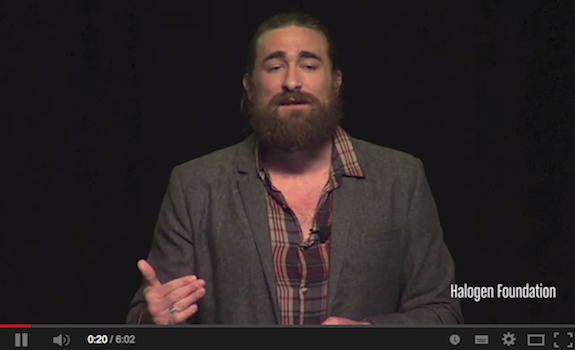 So, why do so many people we admire want talk about their failure as well as their success?

The speakers I meet back stage at The National Young Leaders Day are so normal. Many of them present conventional inadequacy: stage nerves, interpersonal awkwardness, problems involving picking up the kids or how to use their cellphone.

Maybe successful people are more like the rest of us than we dare to believe. Maybe their mutation from our ‘normal’ DNA is in their ability to learn from their mistakes, evolve and create a bridge from their shortcomings and inadequacy that takes them to that sparsely populated island that we see as success.

One of my favourite authors, Malcom Gladwell, who has received healthy servings of both success and criticism in recent years, wrote something very interesting last year about somebody HE admired: economist Albert Hirschman.

The seat of Gladwell’s admiration for Hirschman was his take on what you do in doubtful situatons.  As an economist you might expect Hirschman would be the kind of person to consider the variables and make a sensible rational decision.  Hirschman saw 2 choices people have in the face of doubt:  Exit the situation, vote with your feet and take your resources elsewhere (i.e. quit) or voice your opinion in the face of the dark doubt surrounding the situation, and Act to see something unexpected occur.  Hirschman’s life choices made it clear that he often chose the latter, and as the cliché goes, that made all the difference.

If you are a 16 year old and haven't been forced to deal with a lot of difficulty like Albert Hirschman, then is it any surprise that you might see someone, even a successful person, talking about failure as plain weakness?

My question is to all those charged with the task of educating young people who lack experience on how to deal with failure. When faced with setbacks, which of Hirschman’s choices will you encourage them to take: Exit or Act?

Flash back to when I was 16...one teacher helped me with this problem through one incredible story I will never forget.  Subscribe to our blog to recieve this post.