Earlier this year we launched ATLAS.

This initiative has been a long time in the making.  During that time, countless well-meaning people had suggested that Halogen create an award for great achievements by talented student leaders.  After all, our program was all about getting students to take on leadership responsibilities. Isn’t it logical that we, Halogen, create some sort of special significance around the individuals that are able to do that with the most success?

The problem was that the word individual never sat well.  To us, there is something very wrong with the concept that some people are “leaders” and some people are not.  The really enduring figures in adult leadership that we have met when they presented at our programs over the years, often spent more time talking about the people around them who contributed to the achievements, not just themselves.  This fact was much more than modesty too.  It has become a predictable pattern in established leaders that looks like proof of a deeper dynamic.

Question: How would a student leadership award be measured?

Answer: In the same fashion we judged adult leaders, by their real-life achievements in their sphere of influence.

Significant achievements, particularly those made by novice groups like student leadership teams, are rarely the product of a single person’s individual brilliance.  Rather, the degree to which a group can find roles that fit its members, and also the problems they face, will determine success.

If life skills were the Olympics, leadership might appear to be an individual event, but in the real world, it’s a team sport.  The real magic of leadership is in the making of some achievement that is greater than the sum of a group’s talents.

The world is full of gifted and talented people, and schools are no exception. Academic achievement itself is almost purely individual in nature, but problems that need leadership in order to bring about solutions are very different. Unless those with gifts and talents are united by some common cause or structure, the bulk of that talent is at risk of passing unrecognised in its own obscurity.

Essentially, our hunch was that in a lot of schools in Australia, this concept is well understood, and a leadership culture focused on harnessing the spectrum of what students were good at, in different stages of a project, are producing some truly inspiring stories, and valuable learning for those involved.  The results are in, and they have exceeded our expectations.

We are thrilled to announce the first ever winners of Australia’s Team Leadership Award for Students are Woodville High School in South Australia! 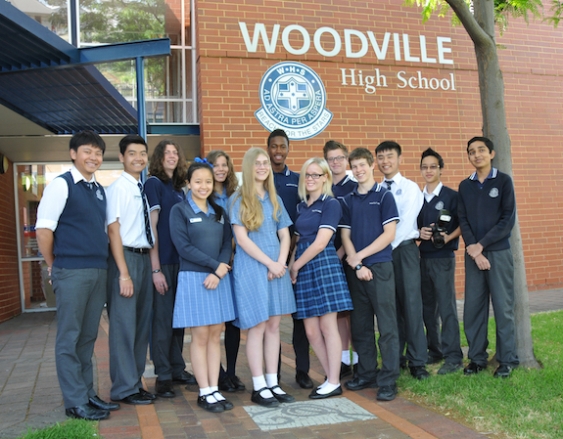 Earlier this year two Vietnamese asylum seeker boys who were enrolled in the school under community detention were taken into custody and returned to closed detention without notice earlier this year. The collective action students undertook following this is nothing short of inspirational.

Through their campaign ‘Bring Back the Woodville Kids,’ this team utilised a variety of mediums including petitions, government lobbying, social media and physical events in an attempt to help their friends, address what they felt was an injustice and in doing so raised an enormous amount of awareness on this pressing social issue.

Their efforts included a petition that now has over 14,000 online signatures, a public rally at Parliament House that had 2,000 supporters and a Facebook page that now has 2,544 members. They also creatively documented their progress through film and used the power of song to help see their message reach a wider audience.

The decision was unanimous. Our panel of judges including 2011 Young Australian of the Year Jessica Watson, world leading Surgeon Dr Fiona Wood, CEO of World Vision Australia, Tim Costello and M&C Saatchi’s Chief Strategy Officer, Justin Graham were inspired by the heart felt initiative and the maturity shown in a joint effort that tackled a sensitive social issue.

“The strategy they used to achieve their goal displayed a skill beyond their years,” commented judge Justin Graham. “I especially admired their creativity and the evident persistence they have shown through several mediums,” added judge Tim Costello.

When we decided to create this award and launch it for the first time this year, we wanted to provide a platform that could champion the stories of young Australians making a real impact. Throughout the entry process, it has been truly encouraging and inspiring to discover just how many schools around Australia have students who are working together to get the most incredible things started in their school and community.

We would also like to take this opportunity to thank all those who interested and commend the following entries who were shortlisted:

After being concerned about the prevalence of “sexting” and showing a deep desire to assist their peers in using technology safely, students came up with an idea for an ipad app which could educate Victoria’s young people about the potential dangers of “sexting” aswell as addressing the underlying values and responsible behaviours expected of them. They worked with ACMI and DEECD to produce the app, “There’s No Such Thing As Safe Sexting” which has been available for download from the itunes App store since early this year and is also available to the community as part of the Victorian Government’s ‘Bully Stoppers Campaign’. Students involved include Tallulah Maher, Phoebe Julien, Helen Shen, Bobo Kwong, Zoe Scott and Eve Revill.

Wanting to reduce the amount of litter and waste in the college, students decided they would join the teacher group who were put in charge of dealing with this problem. The students came up with a number of ways they believed they could decrease the amount of waste being produced. After running a ten-week program, they saw a 50% reduction in the amount of litter on the ground.  They ran surveys and waste audits, influencing a real change in attitudes within the college community. The college has made an incredible amount of savings through student led recycling programs and were assisted by $2,500 worth of grants that students applied for from Keep Australia Beautiful and Waste Wise Schools. Students involved include Lee Durrant, Chase Lieuwes, Remy Lieuwes, Antonio Joboy, Alex Smith and Ben Nolan.

After a young footballer from within their local football league sustained a serious injury leaving him a quadriplegic in 2012, students decided to develop a fundraiser to help. They cam up with the concept ‘High Fives for Trent’ whereby they aimed to smash the world record for the most number of high fives in a minute. This event took place at the local football grand final during half time and everyone involved in making the record made a donation. In the year’s following on from this, the same group of students decided they could continue to use local football grand finals as a way to continue to raise awareness of Trent’s plight and raise funds to assist the family supporting him. In both 2013 and 2014, students managed to raise a total of over $10,000 for the Trent Rothall Support Fund. Students involved include Sarah Nash, Leilani Williams-Bale, Billy King and Harry McFarlane.

Hundreds of children in Adelaide go to school with no breakfast or food to sustain them. They find it hard to concentrate and are unlikely to succeed at school. The student council consisting of nine students decided to tackle this issue, increase awareness and raise $3600 to support KickStart for Kids, an organisation that provides breakfast to needy schools and packs emergency lunches for those children who might otherwise go without food all day. They did this through the creation of a promotional video, arranged a speaker from KickStart to address the school, showed enormous amounts of creativity through the creation of a large breakfast plate which hung in the assembly hall, a large breakfast item for every $300 raised. Instead of a barometer, they created a large glass of orange juice to mark progressive totals. Then the group coordinated a range of events to take place over 6 weeks including an Amazing Race of Middle School Students, a raffle, a whole school barbeque and a Spicks and Specks style quiz between staff and students. They recruited other students in the school to help and at the end of the project raised a grand total of $8500. Students involved include Kate Sharley, Sarah Jones, Nikita Shastri, Julia Scott, Ellie Schofield, Esther Jones, Georgia Standish, Cosette Schilling and Alex Moody.

We are so excited to be able to continue to highlight, share and celebrate students through this initiative, who have demonstrated team skills and combined their individual talents to achieve something greater than themselves. It is this kind of learning that we believe is key to developing leadership potential in all young people today.

ATLAS will return in 2015. For more information head to www.halogen.org.au/atlas