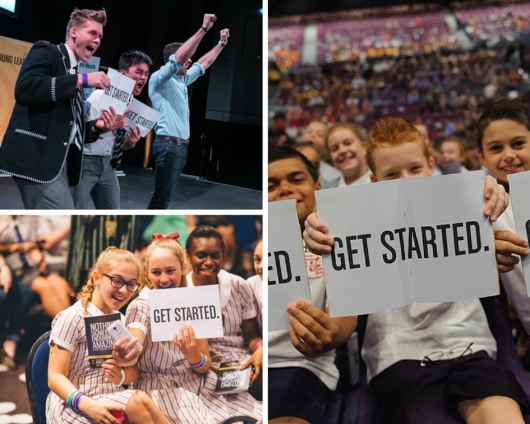 In March 2015, the team at Halogen went into what we like to call “band on tour” mode.  With the program finalised, luggage packed, volunteers, speakers and sponsors on board, The National Young Leaders Day began its tour with events to be held for both primary and secondary students in different cities around the country. We were so excited to be spending the day with young people across Australia and what an incredible adventure it was!

The theme was “Get Started” and we wanted to emphasise that nothing amazing, significant or enduring began that way. We think that many times over, young people are too afraid of failure or too overwhelmed by the size of their dreams, aspirations and ideas that they often choose to not try at all. There is also the common misconception that those we deem to be ‘successful’ or have achieved great things have done so with little to no effort at all.

In our opinion, these instances are few and far between. At our events across Adelaide, Perth, Melbourne, Brisbane and Sydney, we brought a range of influential people in a variety of fields to the stage to share their story. They each had different obstacles, challenges and setbacks along the way and all of these they openly shared with students in attendance.

One of the key learnings that was common among all speakers: the little things they did at the beginning of their journey got them to where they are today.

1. The sky is not the limit. Make a goal, make a game plan, and make it happen -Andrea Boyd, only Australian on Earth in the International Space Station Flight Control Team!

2. Do the stuff you care about - Josh Richards, Comedian & Mars One Astronaut Candidate.

3. Take things one step at a time, be patient. When you see an opportunity, take it - Rachael Leahcar, Musician & Finalist from The Voice Australia.

4. Show people what’s possible, both as an individual and as a team - Matt Cowdrey, Paralympian.

5. Embrace failure. If you have an idea, test it. If it doesn’t work, move on -Andrew Montesi, co-founder of global youth mental health platform, TalkLife.

6. Don’t overthink it, just do it - Carolyn Curtis, CEO, The Australian Centre For Social Innovation.

7. Be selfless. You have to put your ego aside to get where you want to go - Nat Medhurst, Netballer & Olympic Gold Medalist.

8. It is not just about never giving up. You need to make sacrifices along the way - Lorin Nicholson, first blind person to ride over 4,000 km's across Australia.

Have you or anyone else you know got something started? What were the little things they did to get them to where they are now?